Sequelize is an Object relational library (ORM) that helps to communicate between database (Postgres, MySQL, MariaDB, SQLite and Microsoft SQL Server) and programming models on the NodeJS end.

This blog exclusively deals with how to setup associations in sequelize. Primary knowledge of NodeJS, Express and SequelizeJS is recommended.

An association (also called a relationship) models the way two classes are connected to each other.

Sequelize supports three types of associations between their models:

Relational databases implement associations/relationships with the help of foreign keys.

User model contains a column profile_id which connects it to Profile model by referencing id column there. With SQL, you can use JOIN queries to retrieve information from associated Profile table when a User is fetched.

Adding foreign keys also gives us control over actions to be taken when updating/deleting associated models.

In order to implement three of these standard associations, Sequelize provides us four APIs:

To create associations, we have to use combinations of these together:

Let us explore each of these one by one.

In all examples below, Book and User are models that have already been defined. You can define a model with:

One to One relationship

Here, User and Profile share a one to one relationship. A user has a profile and profile has a user associated with it.

Creating a One to One association

A One-to-One relationship could be in a likely scenario be merged back to a single table. So, this relationship is rarely used.

This means, we will insert userId field to Profile model’s table:

One to Many relationship

Here user and comments share a one to many relationship. Each user can make multiple comments while each comment is associated with only a single user.

Creating a One to Many relationship

Unline 1-1 relationship there isn’t a question of where to place the foreign keys here.

The foreign key userId is on each row of Comment

User is marking down Books that he has read. Each user can mark as many books as they want, creating a many to many association between User and Books. Contrary to the earlier scenario with comments, a Book also can be connected to many number of Users.

Each model involved in the relationship can be connected to multiple targets. But we cannot represent this relationship with a single foreign key on a model. If you’re thinking array of foreign keys, that’s ineffective to do joins on. Instead we use this concept called a Junction table; to borrow a diagram from Wikipedia: 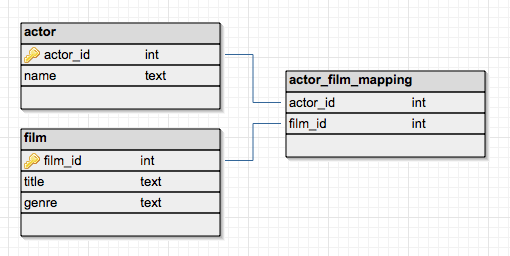 Here actor_film_mapping table is used as a junction table to link together actor and film tables.

To represent relationship in Sequelize:

UserBooks representing the name of the junction table model.

Sequelize also allows you to specify a model instead of string and you can add your own columns to the junction table.

Sometimes, you end up having multiple relationships between entities, for example what if our Users could favorite Books too? As you can guess from the title, you can alias the relationship giving it a unique name.

This is same in the case of all types of relationships.